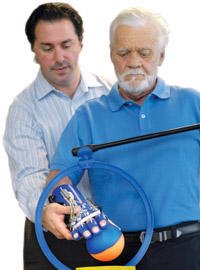 Today, the occupational therapist is a leading force at Saebo Inc, a growing Charlotte company that develops and manufactures rehabilitation products for stroke survivors.

“For years, there were no options,” says Hoffman, Saebo’s president.

The company got its start in 2001 as Affordable Therapy Equipment, changing its name to Saebo three years later.

Hoffman co-founded the venture with his brother, John Farrell, also an occupational therapist.

They created and patented a line of orthotics — specialized mechanical devices to support weakened parts of the body. The goal is to help patients regain the use of their hands and upper extremities.

The company’s SaeboFlex device, a spring-loaded orthotic that reteaches a patient how to grasp and release objects, is its biggest seller.

Hoffman estimates Saebo has sold more than 10,000 of its devices in seven countries. The equipment is custom-fabricated and assembled at Saebo’s Charlotte offices on Water Ridge Parkway.

“We have our fingers on the pulse of what therapists want because we’re therapists,” Hoffman says. “We know what works. We know what doesn’t work.”